In June, 2002, after 22 years in public education as a Speech and Language Pathologist, owner Jayne Murray decided it was time for something else.

She spent two years exploring different possibilities and finally decided to try chocolate. After all, whenever they traveled, her husband, Les, always had to visit the chocolate shops they would see.

After 3 months of reading and learning how chocolate is made, Jayne had a taste test of several brands of chocolate. Les, her son, Ryan, and daughters, Lisa and Kelly, all chose the same chocolate... Callebaut from Belgium.

Now the fun began! The next several months consisted of experimenting with recipes, perfecting the art of making exquisite chocolates, attending seminars, trade shows and sampling. She had a long list of volunteer tasters. The high school teachers in nearby Amesbury, Massachusetts hold the record for the shortest time to empty a platter of samples!

New England Chocolate Company was born and growing in Jayne's kitchen for one year. The Chocolate Fountain made its debut in February of 2004 and its success is growing by leaps and bounds. Now it was time to find a commercial location. 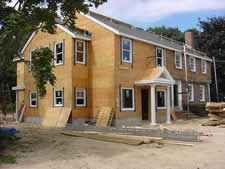 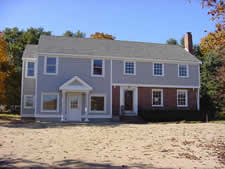 Construction began in July, 2004, in Salisbury Massachusetts. Our combination retail/manufacturing facility opened for business in January, 2005. Come by anytime to view how quality chocolate is made.

Thank you for visiting NewEnglandChocolateCompany.com - Come back again soon.